January 1973. In Boston to see David Bromberg at Club Passim. The opening act is Bruce Springsteen, of whom I write in the Village Voice, “Springsteen’s band was inordinately loud, which worked to his benefit by covering up his vocals and lyrics.” 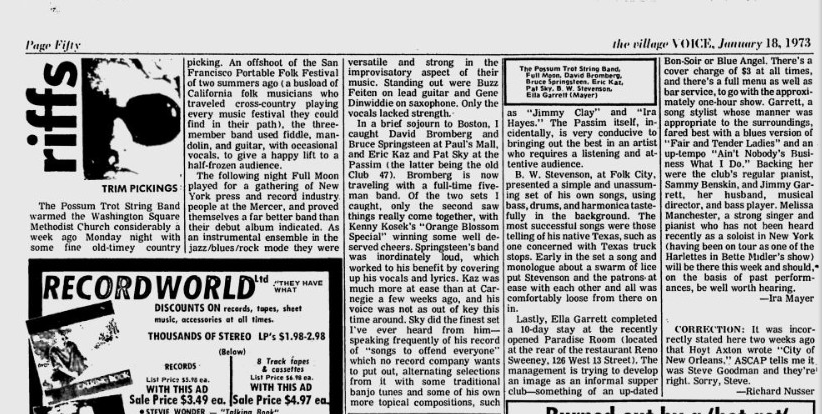 Summer 1974. At a pool party hosted by the publisher of Record World magazine, for which I am now an editor. At this tony weekend home in Wilton, Connecticut, I introduce myself to the legendary talent scout/producer John Hammond, a neighbor of the publisher. Hammond is acknowledged as “discovering” Bob Dylan, Aretha Franklin, Billie Holiday, Bruce Springsteen, and many others. “I know who you are,” he says to me, cutting me off and looking me in the eye. “And Bruce agrees with you about that night in Boston. But he promises you will eat your words.”

August 1975. I attend at least two, maybe more of the legendary Bottom Line shows that kicked Bruce Springsteen’s career into high gear. Saw him in between, opening Upstairs at Max’s Kansas City for Biff Rose, and by late 1973 as a headliner at Max’s. But the Bottom Line shows, one of which was broadcast live on radio, and which coincided with release of his third album, Born to Run, were the spark of ignition.

I never had the balls to introduce myself when I had the chance. Working at Record World, I was also “team photographer” for the Record World Flashmakers softball team. Summer of 1976 the team went out to Redbank, New Jersey a few Saturday mornings to play the E Street band, including Bruce. Among the photos I took was one of Bruce at bat in cut-offs and sneakers. The art director at Record World superimposed an image of Bruce’s guitar over the bat and presented it to him. (In the photo above, Bruce is playing second base.)

There were also shows at the Redbank Theater that stand out. The band vamping quietly behind him, he stood in the spotlight and told stories about his father that were harrowing, clearly for him as well as the audience. But it was raw and honest and vulnerable. “Folkies” at that time could do that sort of thing, but rock and rollers?

Plenty of concert hall, arena, and stadium shows later, some of which I review, many of which I attend simply as a fan, indoctrinating our children over the years into the cult of Bruce. 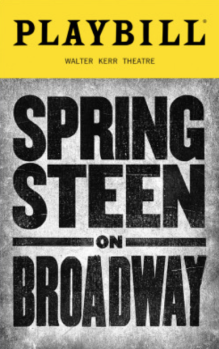 October 2017. Springsteen on Broadway, the brilliant distillation of a career which I see this night with my now 31-year-old son who remembers every Springsteen show he has seen, where he (sometimes we) sat, and most of the playlists. Unlike Bob Dylan, whose shadow hovered over Springsteen for many years, and who revels in often changing his songs to the point that long-time fans have difficulty identifying what he’s playing, Springsteen re-works 15 songs to put them in the context of his life, completely familiar but with fresh force, as though you’re hearing — really hearing — some of them for the first time. They are all solo acoustic this night, except for two performed with wife Patti Scialfa. They are embellished with stories, mostly of his childhood and early performing years, delivered while vamping — now doing it himself on guitar or piano — much as he did at the Redbank Theater in the mid-1970s.

A few months after that initial meeting, I am seated next to John Hammond for a concert at Carnegie Hall, and the honorable Mr. Hammond greets me as an old friend, working to put me at ease. I am 22 years old and incredibly appreciative of his kindness and support, talking with me about what I was listening to and writing about.

This morning, 44 years later, I have no doubt that the show I saw with my son last night on Broadway is what John Hammond, who passed away in 1987, saw in his mind when a scrawny 20-something auditioned for him in an office at Columbia Records.

2 thoughts on “Bruce: My Plate Is Clean”