NEWPORT, RI; July 31, 2019—If there is one musician who embodies the spirit of the Newport Folk Festival today it is Brandi Carlile. Within a one hour span on the opening day of this 60th anniversary festival Friday she sat (really sang) in with Amy Ray on the Harbor stage, with Sheryl Crow on the Fort stage, and then as one fourth of the most anticipated group at the three-day event this year: the supergroup The Highwomen — Carlisle, Amanda Shires, Maren Morris, and Natalie Hemby.

And no band in recent memory so overdelivered on already high expectations as The Highwomen did following an ovation that was by far the loudest I remember to greet a band here. In this first public appearance they previewed their forthcoming (this fall) album in order. Their four-part harmonies are richly textured. All are outstanding songwriters individually and every verse of every song had a memorable lyrical hook. Their joy working together was celebratory.

Theirs are strong messages packaged in tightly-written melodies about the roles they see for themselves in the context of the civil and women’s rights movements; motherhood — these are four distinctive voices writing a verse each for a song about discovering “the kids don’t care” when you have a hangover and a few songs later a melancholy song about having an only child; and relationships across the rainbow spectrum. And from a purely musicianly perspective their cover of Fleetwood Mac’s The Chain was stunning.
The Highwomen are progressive country at its absolute best.

Sheryl Crow bringing on Jason Isbell (perfect pairing on Dylan’s Everything Is Broken) as well as Maren Morris and Carlile for a song each.

Yola, a Nashville-based country soul singer with a big voice ready to unleash who showed up during many sets throughout the day.

Cooks In the Kitchen’s Phil and Brian Cook hosting an array of singers and songwriters including Hadestown mastermind Anais Mitchell and Amy Ray during their set.

Lukas Nelson (the vocal resemblance to his dad at times uncanny) stepping out forcefully from sideman and production.

I wrote too soon singing Brandi Carlisle‘s praises after the first day of the Newport Folk Festival this past weekend. Producing the end-of-second-day set, Carlile gifted this 60th anniversary festival (take that, Woodstock 50) with a triumph steeped in its history, completely of the moment, and focused on the future.

Citing landmark events involving women at the festival, including Judy Collins introducing Joni Mitchell to Leonard Cohen in 1967, the show Carlile curated was all women on the frontlines — the backing band being male. We’re talking Collins dueting with Carlile on Mitchell’s Both Sides Now and a group arrangement with Carlile’s latest group, The Highwomen (see the earlier report), Molly Tuttle, Courtney Marie Andrews, and others of Mitchell’s Big Yellow Taxi; and Sheryl Crow sharing the stage with (in different combinations) Lucy Dacus, Amy Ray, Yola, Maggie Rogers, Jade Bird, Linda Perry and others. All of those artists had performed (or in Collins’s case were to play day 3) in the course of the prior two days. The surprise addition, who had never been to Newport, was Dolly Parton, who performed a five song set of her hits around the theme of women’s strength (“Though I like my men too!”). Here’s the whole cast on an exuberant 9 to 5 closing the night.

The energy, with Carlile the binding voice literally and figuratively, was exciting, uplifting, and powerful. Said Crow, “There’s so much estrogen up here I feel my ovaries getting younger!” If Fort Adams State Park, where the festival is held, could have levitated, this would have been the night.

Carlile warned early on, “If you leave early to avoid the traffic getting out of here, I promise you you will spend the rest of your life regretting it. Don’t worry, I’ll be in the same traffic as you!”

This was 90 minutes of progressive pop-country-folk perfection.

Songs for Beginners, a substitution for an unannounced act that didn’t make it last minute, during which different artists (Rachel Price, Milk Carton Kids, Tallest Man On Earth, Anais Mitchell, and more) each performed a song from Graham Nash’s 1971 solo debut.

Ramblin’ Jack Elliott, turning 88 in a few weeks, reminiscing about his first Newport appearance in 1963 (“They tell me I had a very good time.”) and demonstrating he is still the raconteur nonpareil with a 10-minute shaggy dog lead-in to Don’t Think Twice that he’s told no doubt thousands of times. The Museum Stage, a small indoor venue that probably holds 100 people, was packed mostly with young people who had never seen Elliott, in fact many who didn’t know who he was but had been told by friends to take advantage of the opportunity to hear him. I stood to the side watching faces intently paying attention as though this story was going to reveal the secrets of the universe; there were but a handful who were grinning and clearly got it early in that they were in the presence of a master story-teller. Happy birthday, Jack!

Day 3: Did They Ever Have Songs to Sing!

Cumulatively this was the day with the most fun, interesting music-making culminating with If I Had A Song, a tribute to what would have been Pete Seeger’s 100th birthday. If that closing set couldn’t match the prior night’s non-stop excitement with its focus on the women of this year’s Newport, this tribute still offered plenty of highlights:

Kermit the Frog (who else?) opening the set with Jim James on a duet of Rainbow Connection.

Our Native Daughters (Rhiannon Giddens, Amythyst Kiah, Allison Russell, and Leyla McCalla) sending chills with If You Miss Me At the Back of the Bus.

Mavis Staples with Hozier and Jason Isbell delivering passion to spare on Keep Your Eyes On the Prize (Hold On).

A few favorites from earlier in the day:

EB The Younger, Texas singer-songwriter, ex- of the band Midlake. Take a little Beatles, a little Jimmy Buffett, and some Texas prairie dust…solid songwriting with unusual melodic twists. Fun video I came across (not from Newport) here.

The Infamous Stringdusters, who were joined by the Preservation Hall Jazz Band horns during their main set of old-timey and bluegrass, in this case creating a kind of marching band swampgrass amalgam.

Also, the Bonny Light Horseman, specializing in seafaring songs; Billy Strings & Molly Tuttle, transcribing fiddle tunes for dueling guitars; Our Native Daughters, essentially performing their album but, my — as beautiful and moving as the album is (and it is stunning), hearing those soaring voices live is an experience in its own right; the Milk Carton Kids, combining their sad, melancholy songs with existential angst and humor; and Alice Gerrard, once half of Alice & Hazel (the late Hazel Dickens), with her mournful songs of mines and miners, accompanied now by two young women, Tatiana Hargreaves and Alice Degroot. 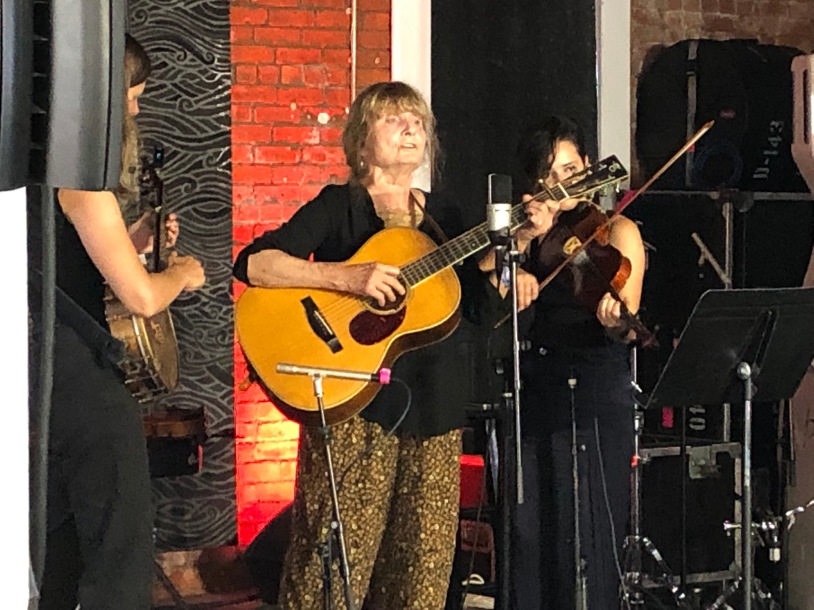 In all, this was the 60th anniversary for the festival, and the 50th anniversary of my first attending at 17 in the summer of 1969 with my friends Howard and Loring (see separate post about the night of the Apollo 11 moon landing and the song Len Chandler sang that night). Riva and I took the kids in 2005, and six or seven years ago, the kids (by then including our daughter’s husband) and I turned the festival into an annual pilgrimage. Riva didn’t cotton to the more indie rock thrust of the music (“It’s not ‘folk music’ as I think of folk music.” And it isn’t.), so she dropped out a few years ago.

But this year may have been the most musically satisfying of this last few years. Yes, Brandi Carlile balanced the old, the new, and the future — but that’s what overall producer Jay Sweet accomplished for a three day event. No easy task.

What’s so different about Newport? It is a spirit of collaboration. That headline-level performers hang out for three days, sit in with each other even before they’ve had their big spotlight moments, and risk some things not working is clearly exciting for the performers and gives the audience a legitimate sense that they’re witnessing something genuinely special. Acts may “do their set,” but it’s the added bonuses of jams and backup support that are unique.

Trey Anastasio (of Phish) and Rachel Price (Lake Street Dive) singing God Only Knows was a rare mismatch this year. But Anasasio brought out his share of guests during his set, and Price was singing backup with any number of people and talking up the Institute of Musical Arts in Western Massachusetts, an organization she and Lake Street support (and to which the Newport Festivals Foundations contributed on their behalf) that teaches young girls and women everything from how to run a soundboard to how to play an instrument to songwriting. Price brought some of the students with her to perform in a two-song acoustic set at the Foundation tent as well as during Lake Street’s main stage appearance.

Whatever it is that festival producer Jay Sweet does to encourage such collaboration and risk-taking — well, to my experience, there is nothing comparable.

[Note: For more videos, just search Newport Folk Festival 2019 on Youtube; there were more than 100 as I posted this.]