It is not easy to feel great about America right now. But there is an antidote.

My wife Riva and I spent nine weeks this summer on a cross-country trek in our trusty 2005 Toyota Camry with three hubcaps. “We’re from Brooklyn,” said Riva when I wanted to replace the missing hubcap before we ventured out. “I like the look. It says, ‘Don’t mess with me.’”

It’s 47 years since I first drove cross-country, camping with my buddy Howard. I had just graduated high school; Howard had finished his first year at Wharton. This 2017 trip was Riva’s first sea-to-shining-sea by car.

As now, 1970 was a politically fraught time in the U.S. The Vietnam War was raging, and it was on that trip that I learned my draft lottery number (206; no need to go to Canada). In the course of the 2017 trip, my Medicare card got activated, and we mostly steered clear of the news and talk radio.

Howard and I had a canvas tent that he recently threw out. Riva and I stayed mostly in cheap motels and Airbnb’s with good shower heads, comfortable mattresses, mini-fridges and complimentary breakfasts — sometimes quite extensive breakfasts, as at Miriam’s b&b in Whitefish, Montana and at the Piccadilly Motel in Radium Hot Springs, BC (yes, we went to Canada this time). 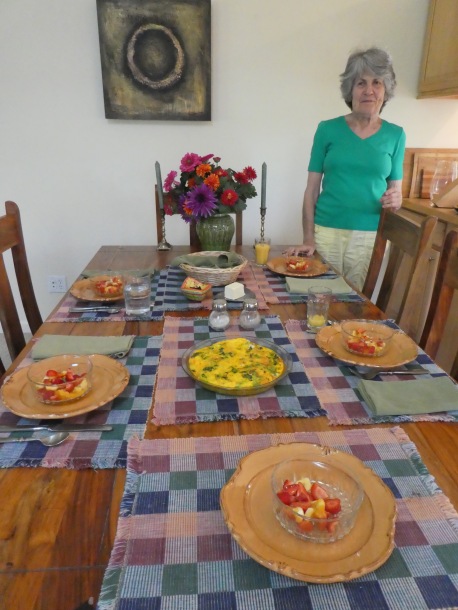 Howard and I visited mostly national parks along the southern route and ate a great deal of canned Chef Boyardee cheese ravioli, heated in the can on our camp stove. Riva and I primarily visited national and state parks and forests in the Pacific Northwest and Canada, shopping for provisions at farm stands, Safeways and IGAs. Typical dinner from our cooler: triple-washed arugula, pulled chicken, and orzo or Greek salad all mixed together.

How to feel great about America?

Each day brought new delights. Just as we might start thinking, “Gee, that was so incredible, nothing is going top it, let’s just start home,” we’d take another detour, hike, or drive and discover another breath-taking waterfall in Yosemite completely unlike any of the others we’d seen.

Or be among the first to reach the just-cleared-of-snow Logan Pass in Glacier National Park in July. Or witness from just steps away the little-visited White Cap Geyser in Yellowstone which shoots 30-feet into the air promptly every half hour on the quarter hour and is but a few miles from finicky Old Faithful. Or find ourselves laying on a tarp on an open field in Yosemite at 10 p.m., staring at the night sky as a ranger recounts how his mother climbed El Capitan with him, at 18 months old, on her back, starting the process of instilling in him a passion for nature and country.

You don’t have to spend nine weeks or travel across the country for this antidote to work. The genesis of this trip was a series of family and work events that happened to take us NY>Chicago>Las Vegas>LA, in that order, over the course of three weeks. 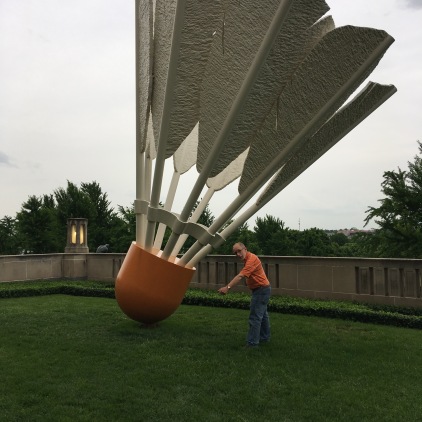 There were stops along that route, too, visiting Ohio’s Cuyahoga National Park near Youngstown, OH where Riva grew up; getting a quick tour of St. Louis from plein air artist and muralist Allen Kriegshauser and his wife Patti (top row above right is one of Allen’s murals for a classroom at the Museum of Transportation in Kirkwood, MO), stopping for great BBQ at Q39 in Kansas City after visiting the Nelson-Atkins Museum of Art, and so on. Being in LA positioned us to visit the USS Midway and get a fascinating over-in-an-instant five hour private tour of the aircraft carrier by Riva’s cousin/doctor/Midway docent Bob Berns. And then it was Yosemite and north.

What we ultimately learned, as Riva put it upon our return, “We need more green in our lives.” And that can be whatever local park, forest or trail is available, for however long we/you have.

That’s America the beautiful. And that’s easy to feel great about.